The basic way of organising chant melodies in the fifteenth and sixteenth centuries is through the modal system.[1]Although it is occasionally outdated, the seminal work on this issue is still Bernhard Meier, The Modes of Classical Vocal Polyphony: Described according to the Sources, with Revisions by the Author, … Continue reading

Each melody has its modal final (‘finalis’) on D, E, F, or G. This is the fundamental organising tone of each mode, and is usually, but not always, the final note of the melody.[2]While the eight traditional church modes remained in use throughout the sixteenth century, indeed even into the present day, there was a significant motion to expand the modal system in the … Continue reading

In turn, each melody is defined by its range (‘ambitus,’) which can be either authentic or plagal,[3]One influential nuancing of this system was introduced by the fourteenth-century Italian theorist Marchetto da Padova, whose further classifications of the modal system were widely disseminated in … Continue reading and its reciting tone which is taken from the Psalm Tones (see below.)

The system is often presented in a chart such as can be seen below. The finals are notated in white notes, and the reciting tones as slashes. 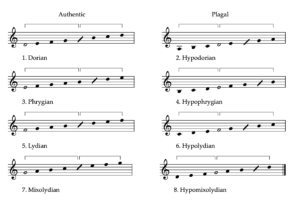 Notice how each octave is organised into fourths and fifths, depending on whether the mode is authentic or plagal. This, along with a mode’s final and reciting tone helps to give each mode a distinctive ‘flavour’ or a characteristic set of melodic cliches which we call its phrasis.[4]The term ‘phrasis’ is taken from Heinrich Glarean’s Dodecachordon published in 1547, and is derived from classical rhetorical thought, in which it can be used as a synonym for elocutio, or … Continue reading)

While the best way to get a sense of each mode is to immerse oneself in plainchant repertoire, a good place to start is with our worksheet and workout video (coming soon,) which present a series of modal melodies compiled for the purpose of memorisation in order to teach the typical characteristics of each mode.[5]The formulae are taken from Bamberg, Staatsbibliothek, Ms. lit. 5; Bailey, Commemoratio brevis, 81-90 and transcribed from Anna Maria Busse Berger, Medieval Music and the Art of Memory (Berkeley: … Continue reading

A related but independent set of conventions used for melodic categorisation are the Psalm Tones. These are melodic formulae which are used for the reciting of the psalms and canticles, which are followed by an Antiphon, a chant melody with a non-liturgical text.

As with the traditional modes of plainchant, there are eight Psalm Tones, which correspond closely to an equivalent mode. Of particular structural importance is the reciting tone (‘tenor’) of each psalm tone.

Each Psalm Tone is made up of two parts:

The Psalm Tones are often presented accompanied by texts for the purpose of classification and to aid in the process of memorisation.

Take a look at the accompanying worksheet and workout video (coming soon,) below and see if you can memorise them.

For further information, see Reinhard Strohm and Bonnie J Blackburn, Music as Concept and Practice in the Late Middle Ages (Oxford; New York: Oxford University Press, 2001), 261-262. ↑4 The term ‘phrasis’ is taken from Heinrich Glarean’s Dodecachordon published in 1547, and is derived from classical rhetorical thought, in which it can be used as a synonym for elocutio, or style. For a thorough overview see Frans Wiering, The Language of the Modes (Abingdon: Routledge, 2013), 149-151. ↑5 The formulae are taken from Bamberg, Staatsbibliothek, Ms. lit. 5; Bailey, Commemoratio brevis, 81-90 and transcribed from Anna Maria Busse Berger, Medieval Music and the Art of Memory (Berkeley: University Of California Press, 2019), 69. The text of each can be translated as follows: