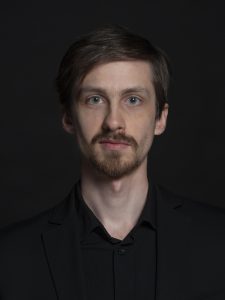 Pieter De Moor (1989) started his musical career in Aalst at the Schola Cantorum Cantata Domino under the direction of Michael Ghijs and also followed vocals and flute at the Academy of Aalst and Asse. He studied singing, Traverso and harpsichord at the Lemmens Institute of Leuven, where he took lessons with, among others, Dirk Snelllings, Frank Theuns, Kris Verhelst, Erik Van Nevel and Dina Grossberger. He studied masterclasses with Maarten Koningsberger, Stephan Van Dyck, Nicolas Achten and Deborah York. As a singer he performed with renowned ensembles such as Vox Luminis, Capilla Flamenca, Cappella Pratensis, Currende, Ex Tempore, Studium Chorale, Laudantes Consort, Victoria Consort and the Vlaams Radiokoor.

He is also an active soloist.  Thus he sang as an evangelist in Bach’s Weihnachtsoratorium and numerous kantaten of several composers. He also has experience as a conductor and he has led numerous concerts with choir and orchestra. He is a regular conductor of the Sangghesellen from Beersel and Happy Art from Kortenberg. Pieter is often invited as a repetiteur by numerous other choirs. His interest is mainly on music in the Renaissance and the Baroque period. In addition, he specializes in the authenticity of the execution practice and the voice use of each style period and every genre.