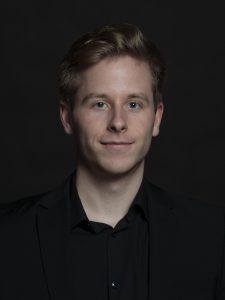 Máté started singing as a boy treble in the choir of the Saint Ignatius of Loyola Benedictine Church in Győr, Hungary. The choir – Collegium Musicum Jaurinense – was led by professional musicians such as Áron Kelemen (Liszt Academy, Sacred Music) and Gábor Soós (Conservatorium van Amsterdam, Organ), whose dedication and commitment inspired Máté to pursue a musical career.

In 2016, he went to The Hague, The Netherlands, to study Early Music Singing under Rita Dams, Pascal Bertin, Peter Kooij and Robin Blaze. He has worked with internationally renowned musicians such as flutist Kate Clark, gambist Mieneke van der Velden, recorder player Daniel Brüggen and lutenist Mike Fentross within the framework of school projects. He has also been involved in international projects connecting European conservatoires, such as the VoxEarlyMus intensive programme in Parma and Urbino, Italy and the AEC Early Music Platform and Vox Multiplier Event in Bucharest, Romania. The performances of these were coached and conducted by Isaac Alonso de Molina, keyboard player, music theorist and teacher at the Royal Conservatoire of The Hague.

Over the past years Máté’s field of interest has strongly been trending towards medieval and renaissance music. He is a member of the ensemble Cantores Sancti Gregorii (Jan Janovcik), a group often present at traditional services in The Netherlands and also becoming more and more engaged in educational activities on a yearly basis in Spain and Hungary. Máté has appeared regularly with Cappella Pratensis, past and upcoming performances with them include several venues in The Netherlands and Belgium, as well as in Italy, France and Finland. Both groups perform from original notation and are eager to experiment with different improvisational and compositional techniques.

Máté still maintains a connection with his old choir in Hungary as well as its ’brother choir’ in Augsburg – the Augsburger Domsingknaben. Recent years highlight a joint project with both choirs in Hungary, with music by 18th-century Hungarian composer Benedek Istvánffy, Bach’s St John Passion with the Domsingknaben in Germany and several other productions in Hungary as part of the Collegium Musicum’s concert series.