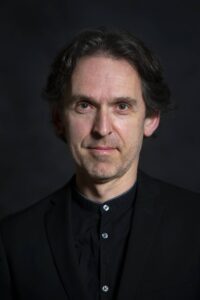 During his musicological studies at the University of Tours, Marc Busnel tackled the repertoire of the Renaissance with the ensemble Jacques Moderne under the direction of Jean-Pierre Ouvrard. At the same time, his musical training and writing studies at the Conservatory of Tours and classical singing lessons with Pali Marinov enabled him to access many musical styles, up to contemporary artistic creations.

His specialization in the music of the Renaissance led him to teaching reading from facsimiles at the CRR in Tours as well as to a collaboration with the Centre d’Études Supérieures de la Renaissance in Tours on the projects Corpus des Messes Anonymes du XV siècle and Atelier Virtuel de Restitution Polyphonique of the musicological research program Ricercar.