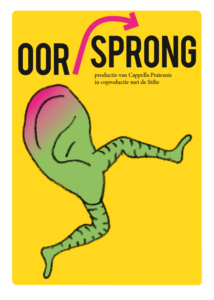 When you talk about Cappella Pratensis, you are talking about polyphony: different voices that together form a whole. This original style of music immediately bears what characterizes our world: a multitude of voices that form a unit. We all know this unity doesn’t come about easily and requires quite a bit of effort. Through the ages, being different from others has been unacceptable to many. Yet it is precisely the recognition of this distinction that is a precondition for living in peace with each other.

In Oor/sprong, two pieces of music by Pierre de la Rue and one by Guillaume Dufay give color to this way of singing together. As a musical counterpart, Remy van Kesteren’s harp is heard. In this difference harp and song will meet. In the dance of De Stilte, this condition is translated into greeting and meeting each other. It is precisely these differences that make the world around us multicolored and diverse. How do we come together, how do we maintain our identity? How do we literally and figuratively bring the individual parts into harmony with each other? Fear of the new, fear of losing one’s own identity, stops time and development. In buildings with a history, four singers of Cappella Pratensis, five dancers of De Stilte and harpist Remy van Kesteren jump from the past to the present with a view to a future that leaves room for encounters. For those who embrace freedom, the other is a partner and not a stranger.

Dance company de Stilte is an internationally operating dance company that works exclusively for children. The company aims to provide ambiguous performances and dance activities that stimulate the imagination, stimulate the playful learning drive of children and stimulate their artistic abilities. Through the game, a child gets to know his world with heart and soul and how to position himself in an overwhelming society. The artistic direction is in the hands of Jack Timmermans.

Remy van Kesteren (1989) is one of the most famous harpists in the Netherlands and is regarded worldwide as a top talent. He made his concert debut at the age of sixteen with the Netherlands Chamber Orchestra in the Concertgebouw in Amsterdam. Then there were performances for the Dutch Princess Amalia’s christening and at Carnegie Hall (New York City, United States). Van Kesteren is the founder of the Dutch Harp Festival in Utrecht. “A true revolution in the harp world”, says Matthijs van Nieuwkerk in De Wereld Draait Door.

This project is part of the five-year Bossche Koorboeken project (2020-2024) and is supported by the Performing Arts Fund, the province of Noord-Brabant, the municipality of ‘s-Hertogenbosch, Prins Bernhard Cultuurfonds Noord-Brabant and the Friends of Cappella Pratensis Foundation.