Josquin and the art of eloquence 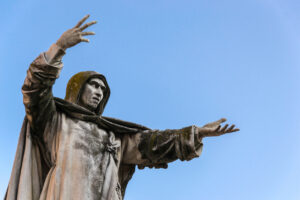 From the beginning of the 16th century, the fame of composers also depended on their ability to express meaning and emotions in their music. Maybe because of his exposure to humanism, Josquin Desprez is often quoted as one of the first great masters of musical rhetoric. To show his exceptional ability at employing musico-rhetorical gestures and resources, we will explore his settings of some of the most potent texts he encountered, especially during his time in Ferrara.

The compositions will be accompanied by dramatic recitations. His connection to the Este court in Ferrara probably allowed him to meet important poets like Pietro Bembo and Ercole Strozzi. It is easy to imagine that the same circle was extremely fond of the works of Maffeo Vegio and Angelo Poliziano, and that they were all greatly inspired by their readings of the Greek and Latin classics.

Finally, Josquin’s stay in Ferrara most probably prompted his settings of the Psalms 31 and 51, that were famously also the subject of two meditations that the great rhetorician Girolamo Savonarola (photo) wrote in prison, waiting to be executed.

In this program you will discover how Josquin was inspired in his music by some of the most powerful rhetorical poetry of this period. The compositions are accompanied by the poems from which they are derived, dramatically recited by singer/speaker Nico van der Meel. And during the sung parts you can read along in the original music manuscripts on a large screen!