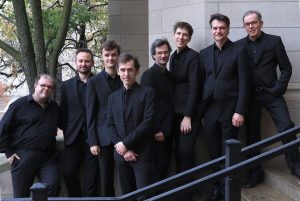 Cappella Pratensis specializes in the music of Josquin Desprez (= Josqinus Pratensis) and other polyphonic composers of the fifteenth and sixteenth centuries. The ensemble performs its own programs and original interpretations, which are based on academic research. As was customary in the renaissance, the singers of Cappella Pratensis usually stand around a central music stand, singing from facsimiles of original choirbooks. This creates a unique perspective on the repertoire. The ensemble, founded in 1987, is now under the artistic direction of singer and conductor Stratton Bull.

In addition to regular concerts in the Netherlands and Belgium, Cappella Pratensis performs in leading international festivals and venues in France, Portugal, Germany and the United States. The ensemble also has also released several CD recordings which have been greeted with rave press reviews and awards, including the Diapason d’Or and the Prix Choc. From 2005 to 2007, Cappella Pratensis was ensemble-in-residence at the Fondation Royaumont (France), where it gave courses and concerts, and worked with several prominent musicians. In 2009, it released a DVD/CD production of the Missa de Sancto Donatiano by Jacob Obrecht, which contained a reconstruction of the first performance of this mass, filmed on location in Bruges, supplemented with extensive documentation. This production was awarded with a Diapason découverte and the highest rating in the professional magazine Classica.

The CD Vivat Leo! Music for a Medici Pope (2010), directed by guest conductor Joshua Rifkin, was awarded a Diapason d’Or. A successful series of concerts of the Requiem of Pierre de la Rue was led by guest conductor Bo Holten. A DVD of one of these concerts, performed as part of the event Jheronimus Bosch 500, was released in 2010 under the title Bosch Requiem.

In January 2012 a new CD, containing the earliest surviving polyphonic requiem masses in music history, those by Johannes Ockeghem and Pierre de la Rue. In February 2014 the ensemble released a CD containing music written for the feast of the Assumption and transmitted in choirbooks from the Vatican, including Josquin Desprez’s masterpiece Missa Ave maris stella. In late 2015, the ensemble recorded the Missa Cum Jocunditate by Pierre de la Rue.
In 2016, Cappella and the Nederlands Kamerkoor performed eight concerts of the world premiere of the Missa Unitatis, composed in 2008 by Anthony Pitts (* 1969) in a unique partnership with choirs in Antwerp, Breda, ’s-Hertogenbosch, Eindhoven, Tilburg and Helmond. It has also performed during the Early Music Festival in Utrecht, and presented five performances of the program Christmas with Josquin in the Season of Early Music.

Cappella Pratensis shares its vision and approach to vocal polyphony with professionals and amateurs in masterclasses, with multimedia presentations, and also in a week-long summer school that takes place annually during the festival Laus Polyphoniae in Antwerp. In a structural collaboration with the universities of Leuven and Oxford, the musical manuscripts of the workshop of Petrus Alamire are explored by musicologists and adapted for use by other musicians.

Read more about the individual singers